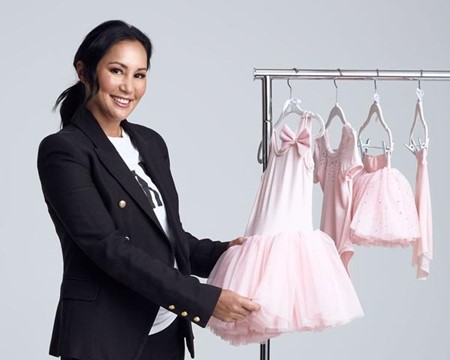 Felicia Palanca’s story has always been engrained with dance. Starting lessons at just 3 years old, Felicia was the youngest student at the time to join the Australian Ballet School at the age of 14, and the youngest to join the Australian Ballet at 16. As a young rising star, Felicia graced the cover of Dolly magazine, placed third in the prestigious Genée International Ballet Competition in London and won various scholarships in Australia, France and Germany. For over a decade Felicia graced international stages including New York, Shanghai, Tokyo, Paris and London as a Senior Artist, where she danced in Principal Roles for classics including Swan Like, Copelia, Don Quixote and The Nutcracker. Felicia has achieved the impressive titles of Senior Artist of the Australian Ballet, Principal Dancer for the Munich Ballet, Classical Ballerina and Dynamic Contemporary Dancer.

After retiring as a professional dancer at the age of 28, Felicia started working in the design team with a leading international dance brand and forged a successful career as a lead designer for ladies and kids for the European and American markets. This pivot into designing dancewear ignited a fire within her to create her own label so after the arrival of her first child, the brand Flo Dancewear was launched in 2008. Flo Dancewear was a market disrupter in a retail category that had typically been expensive and out of reach to many. It was affordable, accessible and combined fashion, function, and form.

Felicia’s driving force is her passion for more people to experience the joy dance can bring, so off the back of the success of Flo Dancewear, Flo Active was launched in 2015. The label is a range of dance-inspired activewear for tween girls aged 6 – 16. The two fashion labels are currently valued at $10 million dollars and are sold in Australia online with their own store and in MYER, David Jones and THE ICONIC, and internationally at Macy’s and Zappos Discount Dance and Amazon.

“From the age of three, I wanted to dance; it’s all I ever wanted to do. I loved the freedom my body felt when I moved to music. Dancing on stage was a dream world, a magical place that carries so many memories for me, and when I wasn’t dancing, I would be backstage with the costume designers and the wardrobe manager pouring over all the incredible costumes. I was so lucky to wear the most beautiful fabrics and adornments every day. I decided I would develop my own label with all the influences of dance and design that had so inspired my career. FLO is fashion, function, and form combined; three key elements also paramount in dance. I want it to be accessible to all children. I only use fabrics that are soft and special. They all stretch so that children can feel free in their clothes whether they are playing, dancing or resting!” – Felicia Palanca on Flo Dancewear

“As a mum of a teenage girl, I know how important it is for teenage girls to feel comfortable in their own skin, and to continue to lead an active and healthy lifestyle. If I can help influence that in some small way, by creating activewear that girls feel good moving in, then I have hope I have played some small role in the wellness movement which I have such personal belief in.” - Felicia Palanca on Flo Active

Flo Active is stocked in Australia at David Jones and Myer stores and sold on The Iconic.

Internationally it can be found at zappos.com